What is a Sufi? What does Sufi do?

Definitions of Sufi? Meaning of Sufi? 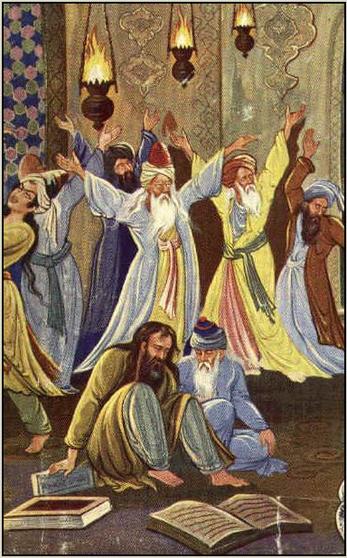 (1) A Sufi is one who does not separate himself from others by opinion or dogma; & who realizes the heart as the Shrine of ALLAH (God)

(2) Sufi always thinks that ALLAH (God) is watching him & for this reason he is always Pure from sins.

(3) The Sufi desire is to remove the false self and discover ALLAH (God) within.

(7) The Sufi gives Love to all created things & Abhorrence towards none.

(8) The Sufi gets a greater power of love.

The word, ‘Sufi’ has been ascribed various origins, among them words meaning ‘purity’ and ‘wisdom.’ The Sufi, therefore, is one who has discarded all that does not belong to his innermost self, and who has cultivated the garden of the heart, for there is no other place where wisdom grows.

The Sufi sees the Divine Presence reflected in all names and forms, and is limited by none. Knowing that no man-made distinction can contain the One Being, the Sufi offers sincere respect to all forms of worship, while ever striving to be free of dogmatic limitation.

The Sufi is one who has two points of view: his own, and that of the other.

Sufism, the Religion of the Heart

The subject of Sufism has been interpreted in various ways in India, Arabia, and other Middle Eastern countries over hundreds of years. This subject is also found in numerous historical documents as well as in contemporary publications, and yet to the question, ‘what is Sufism?’ there seems to be no precise definition which could satisfy the curiosity of those who, in the disguise of seekers on the spiritual path, are searching only for the key to performing wonders.

Sufism is neither a religion nor a cult nor a sect, nor is it only from the East or from the West. Sufism, which means wisdom, has always been and shall always be an open door to Truth; the wise feel sympathy towards all beliefs, while at the same time avoiding speculation upon abstract concepts. Sufism believes in the Divine origin of every form of worship in which the unity of religious ideals is respected.

Sufism, which is without any religious obligations, regards spirituality as the religion of the heart. That religion is one wherein the unity of religious ideals is followed unconditionally in search of truth, without going astray in following the followers of the followers of the great religious reformers, whose messages have been altered beyond recognition through the centuries by those who confuse mysticism with fanaticism.

In Sufism there is no place for comparisons or preferences. All Messengers are regarded with the same respect and their messages are worshipped with the same veneration, knowing that Buddha was not a Buddhist, Christ was not a Christian, and Mohammed was not a Mohammedan. They were bringers of new impulses of the Divine Message, which the multitude uses as toys to play with, and impostors use for power games.

Sufism is an attitude of inner sympathy towards all beliefs. All religions are Sufi religions as long as they recognize the limits inherent in any speculative interpretation of Truth. One might say that Sufism is a process leading to the widening of the horizon of the heart, so that Truth may shine within as a brilliant sun, illuminating all that is receptive of its rays of light.

Through the ages there has been one religion after another, but each one came as a confirmation of the previous one. Now, in our century and with the development of science and communication, it has become clear that each religion had a special purpose to fulfil at a particular period of human evolution. For the wise, one can only be really attuned to any religion if one’s heart is open to all religious beliefs with the same love and understanding for each.

If one took six or seven different glasses, each one of a different colour, and poured water in each glass, the water would appear red in one glass, blue in another, green in a third, and so on, although it were the same water in each. In the same way, all religions are in their origin of divine inspiration, but, like the image of water poured into different coloured glasses, as soon as divine inspiration is crystallized in human thought, it acquires the colour of that thinking. We then call the one colour Hinduism, another colour Buddhism, another Islam and still other colours are called Judaism, Christianity, or by any other religious denomination.

Therefore, since the origin of all religions is of divine nature, these can only be understood inasmuch as one is prepared to recognize the unity of all religious ideals, at which level all religions are so many derivations of one and the same impulse, the cry of the heart, the longing of the soul for God.

Wisdom might reveal itself in the guise of a recognizable form, although wisdom is not tangible, nor does it have a form of its own. Examples of wisdom might perhaps be described, although wisdom cannot be defined in words. Furthermore, there are just as many expressions of wisdom as there are seekers of wisdom. Yet, for the one who is really wise, there is only one wisdom but many different ways of understanding that one wisdom, and different forms of expression through which the one and only wisdom is recognized by the wise.

Wisdom takes it for granted that some very specific dogmas must have made much sense at the time that they were preached, but these don’t necessarily apply any more in our world today, where science has taken over the responsibility of such subjects as health and education, which were originally once part of the basic structures of ancient religion.

The word Sufi means wisdom, but that does not mean that when pursuing the Sufi path one is necessarily wise. Sufism is a test with which one is constantly confronted, when expected to show an example of how well one understands what spirituality truly is. Spirituality does not mean drifting away upon the clouds of illusion; it means having the feet firmly on the ground of reality, proving thereby, without pretence to have acquired discipline over the physical and mental energies. It is only then that one can possibly inspire others on the path where honesty in spirituality is the watchword.

On the path of spirituality, one ventures to vanquish one’s own faults rather than to judge others, whose faults are not very different to one’s own. One tries to master one’s own feelings rather than misinterpreting those of others, and one treasures even the smallest sign of appreciation coming from those who are dependant upon one’s sympathy.

At this level of consciousness, there are neither limitations nor opposites, nor is there any relationship with pre-conceived ideas, such as those expressed in all dogmatic religious interpretations of Truth. When trying to explain ALLAH (God) one only fashions an individual concept, limited to the size of ones thoughts.

Perhaps one might discover someday what it really means to have inner security, when seeing that all things only have just as much importance as one attaches to them. Nothing is important and yet everything is important, but that which seems so important to oneself does not always seem important to others. The Sufi will always remain free from judging others and from specifying what is good and what is bad. For the Sufi, good and bad are concepts that can only be discerned within one’s own conscience.

As soon as one attempts to define abstract concepts, one is taken away into the labyrinth of one’s own thoughts that soon break down into speculative descriptions from which one constructs dogmatic ideas; these are then added to the many pre-conceived ideas picked up through one’s education, together with the numerous impressions and influences which constitute our mind world. Then, when one tries to express one’s beliefs and understandings, the words tend to deviate from the original ideas, which were themselves only arbitrary concepts, and the result of all this is so often presented as being the one and only truth.

The Sufi Message is a message of, ‘Spiritual Liberty,’ revealing in its essence, the true nature of spirituality as being the liberation from dogmas and preconceived ideas. And in its call for “Unity of spiritual Ideals, the Sufi message offers a source of inspiration, reaching far beyond such feelings as ‘my religion’ as opposed to ‘your religion,’ because there is only one religion and several interpretations of the one Truth.

Let us unite as brothers and sisters without any pretension, with the great ideal of bringing happiness to a world where illusion reigns regrettably in full authority, over the freedom of spiritual awakening.

The religion of our time is destined to be the religion of the heart, and since there are many hearts, there are obviously many religions, although all religions spring forth from one and the same heart, the temple of ALLAH (God) wherein, when wisdom prevails, love harmony and beauty together constitute the living altar.