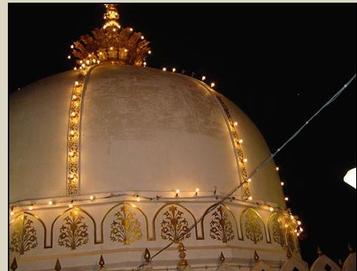 On 27 of march 2002 as 13 of moharram as it is a first month of Islamic calender . a miracle had take place in the holy city of ajmer at the holy shrine of huzoor khwaja gharib nawaz (R.A.).After namaz e maghrib at the tomb of holy shrine akidatmands of khwaja saw a image (shabi-e-mubarak) .

All recognized religions of the world show that divine preaching and miracles have always been co-related and all the prophet, Saints, messenger of God and founder of various world religions were endorsed with supernatural powers to propagate the divine message.

Gharib Nawaz (R.A) as one of the Wallie of Allah, was also endowed with such “Supernatural powers to propagate the divine message for this, I would say that his full life right from his birth till death was full of miracles. He did whatever, he wanted and the almighty always granted him blessing without any delay and if we discuss in deep about his miracles this full website will get completed in miracles only so I am writing few of his miracles.

(3) It is said –During his tour, Khwaja sahib (R.A), Ohududdin Kirmani (R.A) and Shaikh Shahbudin(R.A) were sitting together at a place and discussing some religious point of faith. Suddenly a young boy with a bow and arrow in hand passed by Khwaja Sahib (R.A) saw him and said, ” The boy is the future king of Delhi.”
And his prediction proved to be true and boy became the king of Delhi with the name of king Shamsuddin Altamash and ruled the country for about 26 years.

(4) One day, a weeping old woman came to him and said, “Huzoor, the ruler had killed my innocent son. For God sake, help me.”
Hearing the woman, Khwaja Sahib (R.A) was moved very much. He with his sceptre in his hand accompanied the old woman. Many followers and disciples also accompanied him. He arrived at the dead body of the boy, stood there silently and gazed at it for quite a long time. Then he stepped towards the body, put his hand on It said, ” O boy, if you have been killed innocent, come to life by the grace of ALLAH.” He just completed his sentence, the boy was alive. Khwaja Sahib (R.A) further said, ” The man should be so close to ALLAH that his prayers are to accepted without any delay. If it is not, then he is not a Faqir.”

(5) Though Khwaja Sahib (R.A) had no means of income but he set up a langerkhana ( alms- house). The food was so abundant there that all the poor and needy of the city were fed with it. It is said that he directed the Chief of the alms- house to demand as much money as needed for the langarkana. The Chief used to come to him daily in the morning. On his arrival Khwaja Sahib (R.A) used to unfold the corner of his Musalla and asked him to take whatever required from the hidden treasury. He himself used to keep fast and broke it with the dried barley bread, weighing not more than five misqal (few grms)

(6) A man came to him with the bad intention of killing him and showed great faith and loyalty to Khwaja Sahib (R.A). But his intention was revealed to Khwaja Sahib (R.A). So he said, “I am here, Do whatever you desire.” Hearing this, the man started trembling and with great humbleness he told that it was not his own desire. Some other man wanted him to commit this heinous crime. Then he took out the dagger, and placed it before Khwaja Sahib (R.A) and asked for punishment. But Khwaja Sahib (R.A) said, ” Revenge is not the practice of the Saints. Well, I pardon you.” The man fell into the feet of Khwaja Sahib (R.A), repented, accepted Islam and became a disciple.

(8) Once, Hazrat Khwaja Qutubuddin Bakhtiyar Kaki (R.A) was meeting with the king in the fort of Delhi. The other officials were also present there. Suddenly a characterless woman came there and asked justice. She requested the king to get her married, since she was under the state of mental pain. The king asked her to whom she wanted to be married, and which sort of agony she is facing, she said, “The fellow who is very close to you and called himself as Qutub has raped me. As a result I am pregnant. ” Hearing the entire episode, all those present were shocked . They pulled down their heads with shame. Qutub Sahib (R.A) was also ashamed . He could do nothing but he turned his face towards Ajmer and called Khwaja Sahib (R.A) for his help. As and when Khwaja Sahib (R.A) heard cry of his dear disciple for help, he immediately reached there. He asked Qutub Sahib (R.A), “What is the matter ? Qutub Sahab (R.A) could not speak a single word and tears started rolling out of his eyes. The episode was revealed to Khwaja Sahib (R.A).
All this made Khwaja Sahib (R.A) very much angry. He turned to the crooked lady and said ” O child, inside womb, your mother has alleged that Qutab Sahib (R.A) is your father. Tell whether it is true ?”
There was a clear voice, from inside the womb, heard by all present there. The child said, The statement is all wrong. The woman is a prostitute and has been sent by the enemies of Qutub Sahib (R.A) to insult and defame him.” All the people were much surprised on hearing all about. The woman himself admitted her false allegation.
Khwaja Sahib (R.A) said, Only Allah can award honour and repute.” And then he returned. Except Hazrat Khwaja Qutubuddin Bakhtiyar Kaki (R.A), all were much surprised on arrival and disappearance of Khwaja Sahib (R.A).

(9) It is said that one day, one of his disciples came to him. Khwaja Sahib (R.A) was busy in offering prayers. When he finished his prayers and turned to the disciple the disciple said “huzoor the ruler of the city has ordered me to exile without any fault of mine. So I am in great trouble.” Khwaja Sahib (R.A) kept silence for some time, then said, ” Don’t worry he has been punished. “When the disciple returned to the city, he heard the news that the ruler fell from the back of the horse and has died.

(11) One day, Khwaja Sahib (R.A) was sitting among the disciples and preaching. Suddenly he saw something on his right side. He stood up as paying respect to somebody. It happened again and again as and when he glanced towards right side. When the assembly was over and people left away, one of his servants asked the reason as to why he had been standing up repeatedly on having a look at right side. Khwaja Sahib (R.A) said, “The Mazar of my Peer-o-Murshid is located in that direction. As I looked towards that direction, the Mazar came before my eyes, so I stood up to offer respect.”

(12) It was the assembly of the saints. Everyone of them agreed to show his miracles. Thus Khwaja Usman Harooni (R.A) turned his Musallah and took out some pieces of gold and gave them to a Durvesh and asked him to bring some sweets for all present their. Shaikh Ohuddin Kirmani (R.A) touched a piece of wood and it turned into gold.

When Khwaja Usman Harooni (R.A) insisted, Khwaja Gharib Nawaz (R.A) knew through Divine inspiration that one of the persons of the present assembly is hungry but could not tell others because of modesty . Thus Khwaja Sahib (R.A) took out four barley Rotis and put them before the person.