New Turn in Life of Khwaja Gharib Nawaz (R.A)
As a will of Allah when Khwaja Gharib nawaz (R.A) was at a small age of 14. his father left for heavenly abode and he became an orphan. He inherited a garden and a mill from his father. After few months of his father death his mother also left this transitory world. 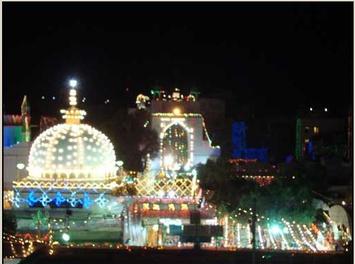 Since his early age, Khwaja Sahib (R.A) was fond of the company of dervesh and fakirs and had a great respect for them.

One day, as to routine when he was watering the plants , a Majzoob arrived there. The Majzoob was SHEIKH IBRAHIM QUNDOZI (R.A). When Khwaja Sahib saw the old man, He left his work and stepped forward and welcomed him. He kissed the hand of the old man, took him to tree and requested him to sit under its shadow. At that time Khwaja Sahib (R.A) had nothing to offer him. It was the grape season and the bunch of grapes were there on the trees. He plucked a bunch of sweat and juicy grapes, offered him and then sat in front of him respectfully.
The God- Loving Majzoob liked his gesture and enjoyed few pieces of grapes with pleasure. The enlightened Majzoob immediately recognized that the promising child is in search of truth. So he took out a piece of oil cake, crushed it under his teeth and put into the mouth of Khwaja Sahib(S.A). As he had a great respect and love for dervesh and fakirs , he swallowed it . And Lo ! all of a sudden, the entire world lost its importance and there was no barrier between him and God. With swallowing of piece of oil cake, he was in spiritual world. When regained his consciousness , he found himself alone. SHEIKH IBRAHIM QUNDOZI (R.A) had taken his way.

Though SHEIKH IBRAHIM QUNDOZI (R.A) left Khwaja Sahib alone, but it was unforgettable to him what he witnessed in the spiritual world. He had a great desire to witness the same repeatedly. He tried his level best to have patience and restraint over himself but was unsuccessful.
He could not control himself. He was now under great influence of love and passion and when his love for truth crossed its limits, the entire world became immaterial to him. Thus he sold his belongings, distributed the cash and his possessions among the poor and needy and set off in search of truth with a meager maintenance.

After having glimpse of divine light through SHEIKH IBRAHIM QUNDOZI (R.A), Hazrat Khwaja (RA) was very restless and his thirst for acquisition of knowledge further fanned the fire of love and passion so he left the land of Samarkand and separating the name of Allah set off towards west in search of his MURSHID-E-KAMIL At last he reached a town named Haroon which was away from Neshapur.

Blessings of Allah to Khwaja Gharib Nawaz (R.A)
Hazart Khwaja Gharib Nawaz (R.A) reached Makkah muazzama and one day while offering prayers in Kaaba, he heards voice saying ” O moin-uddin I am greatly pleased with you and grant you pardon “Ask for any thing thou may’s like, so that we may grant that to the.
He submitted respectfully This ” O Great God Give salvation to the followers and disciples of Moin-uddin come the reply ” O Moin-uddin, you are accepted one I will give salvation to the followers and disciples and also to thoue who may enter the fold till the day of Resurrection”.

After performing pilgrimage to Kabba and performing the Haj, He reached Medina, he was engaged in prayers in QUBA Mosque. During this time he received the mandate from the court of holy prophet Mohammed (S.A.W) to the effect that ;-

” O- Moinuddin! you are a helper of my religion, I entrust to you the country of HINDUSTAN (INDIA ),There prevails darkness proceed to India and spread the Gospel of truth.”

Receiving, This mandate, he was immensely pleased but wondered, as to where Ajmer was situated. In the meanwhile, He was blessed by seeing the Holy Prophet Mohammed (S.A.W) in dream and our NABI (S.A.W) showed him the city, the fort and the situation of Ajmer