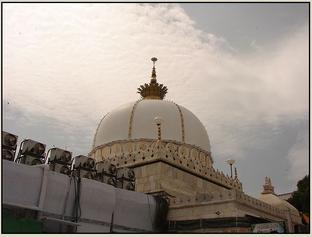 The message of Khwaja Gharib Nawaz and the Saints of  Chishtiya denomination was echoed by the Saints of Bhakti movement. The fact that the religious leadership of the Bhaki movement in the 14th and the 15th centuries came from the lower strata of Hindu society a section which had been deeply influenced by the Chishty Sufis and their Khanqah life is too significant to be ignored. Probably never before in the long history of Hinduism, religious leaders had sprung from those strata of society to which Chaitanya, Kabir, Nanak, Dhanna, Dadu and others belonged. There was hardly any Saint of the Bhakti school who had not passed some of his time in a Khanqah of Chishty Saint.

A mind which failed to see any wisdom or truth in any way of life or thought except his own, was the greatest obstacle to the growth of syncretistic tendencies. The Chishty Saints adopted an attitude of sympathy and understanding towards all cults and creeds. For example Amir Khusrau, an exponent of Chishty ideology and a favourite and beloved disciple of Hazrat Nizamuddin Auliya exhorted his co-religionists : A-e-K-e-Zebut Tana ba Hindu Bari, Hum Azo Amoz Parastishgari. (O you who sneer at the idolatry of the Hindu, learn also from him how worship is done.)

This broad and cosmopolitan outlook helped in breaking that spirit of mistrust and isolation which honeycombed relations between the various culture groups of India and paved way for rapprochement at all levels, social and ideological. Amir Khusrau who is, by far, the most powerful exponent of this attitude of Chishty Sufis, refers to Hindu customs and ceremonials in a spirit which must have been instrumental in discovering the principles of essential unity between different religions.

Sufi Hameeduddin Nagauri adopted the life style of Rajasthan i peasants. He became a vegetarian, mixed with the local inhabitants and learnt their language. Baba Farid lived upon Pelu and dela which grow in Punjab. Eminent Sufis and Yogis used to meet at his Jamaat Khana to discuss and practise Sufism. His Punjabi poetry which is full of teachings and mysticism is given place in Guru Grantha Saheb as it was very much liked by Guru Nanak Ji. Shiekh Nizamuddin Aaulia attracted largest crowds after Khwaja Moinuddin Hasan Chishti. Thousands of people used to live upon the Langar distributed from his langar khana. Such people included Muslims as well as Non-Muslims. His broad-mindedness can be adjudged by the fact that once he saw a procession of Hindu devotees with music and chanting proceeding towards Jamuna. He uttered “Har quame raast rahey din-ey wa quibla gahey” i.e. every people has its own path of righteousness, beliefs and focus of adulation. This shows the inborn sense of toleration and appreciation of other religious traditions by Chishty Sufis

Chishty Sufi Hazrat Amir Khusro is the embodiment of cultural ethos of India by being inventor of Sitar and so many Ragas, Raginis, Pahelis, Geet and Sufi renderings and so he is called Tuti-e-Hind (Nightingale of India)

Music has been another field to which the Chishty saints contributed generously. They came to realize that, like poetry, music also stimulated emotions to the ecstatic state, necessary for union with God. The Chishtiya order, sanctioned Sama based on musical rhythms that enhanced the effect of poetry. They enabled the devotee to plunge into a state of trance called Haal. The effectiveness of Sama can be gauged by the fact that many Sufis embraced death while listening to certain poetic lines which intensely affected their heart. It is said that Khwaja Bakhtiyar Kaki spiritual successor of Hazrat Khwaja Moinuddin Hasan Chishty (R.A.) surrendered his life while hearing the following lines:

(To those who have been killed by the dagger of submission,There comes new life every moment from the unseen world.)

Chishty order of Sufis, and their spiritual mission is to shatter the barriers which stands between man and man for diverse reasons and knit them together in common bond of fraternity, love, regardless of religion, caste or creed affiliations. We also believe and practise that God is symbolic of love and the entire humanity in its diverse form constitute a single family. It is indeed almost a-kin and similar to the VEDANTA PRINCIPLE “VASU DHEVA KUTUMBAKAM” (THE WORLD IS ONE FAMILY)