​   Aulia’s are the chosen friends of Allah. They are the one who have drunk from the fountain of eternal life during their lifetime on earth. They are those devotee and sincere bondsman on the earth who remember Allah ceaselessly and spend their life seeing inner purification through endeavor, toil, abstinence and prayer. They are the one who cease to depend on the “creation” and give them selves unto the creator, seeking sustenance from sources unimaginable, attain nearness to the divine light through constant worship and service to humanity. Their journey is endless. They are shore less sea with out any bottom and craving for Allah with out any limits. Each part of their body is completely rid of non-divine influence. Their heart become like a clean mirror reflecting back the reality of things. Their judgment does not err. Being giving the divine light, they see the things in their true perspective. They see every thing including Angles, Souls, Divine Thorns, the “Lohe-e-Mahfooze”, the guarded tablet in the seventh Heaven containing records of all events distinct to take place from the beginning to the end of the universe. They see the past, the present and the future before them.

In the Holy Quran Sura “Yunus” Ayat 62 the verse says:-

“Behold! Verily on friends of Allah, there is no fear, nor they shall grieve”.

Holy Prophet (S.A.W.) has said in Hadith Qudsi quoted below:-

Allah has said ” The most value worshiper of my bondsman, seeking my nearness, is the one I have opposed on him; and my servant continues to draws me near Me through the work of supererogation, until I love him. And when I love him, I am his ears so that he hears Me, and his eyes so that he sees Me, and his feet so he walks by Me, I am his hand so that he do work by Me. When he raises his hand in the prayers, I grant his request, when he seeks refuge unto Me, I protect him”. 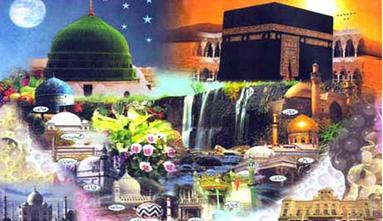 The most Merciful Allah has bestowed powers in them by which whatever Aulia Allah thinks and says become ” KUNFA YA KUN” (be and it become). Hundred of people have been declared as dead have been brought to life by these Aulia Akram back to life again. Dead animal and birds has been also restored to life again although their bodies have been deteriorated since long. Thousand have been cured by them with out medicines including those living far away from them. Prophet like Hazrat Easa and Hazrat Moosa would envy their super-natural phenomena. They all are humble followers of Prophet Mohammed (S.A.W.) so low before the Prophet how great would be they are. One wonder why people hesitate very much to pay due respect to these great personality, spiritually perfect and enlightened ones——the Saints, who have been laid to rest after their last breath on earth. Such people had a strong feeling that to visit the shrine of a Saint tantamount of a sin of “Shirk”.

According to their belief, these Prophet & Saints who have been laid to the rest has gone forever and nothing can be achieved from them. Even their bodies have been eaten up leaving no trace behind the grave. Further they have in their minds as to why should they seek any assistance or fulfillment of their desires from them or from any one else even they have enough of faith on Allah who the giver of Rizq (food), cure (shifa), IIlm (knowledge). No one can deny their on Allah of getting all the things from Him, but do they all the things from Allah. If not, then why not ? Few example and conversation will convince them for change in their approach. To visit the Aulia’s (saints) to go to their Mazar (Dargah Sharif), or to kiss their hand, feet’s, or their “Chaddar” covering place on their Mazar or even to their request them for grant of wishes (Murad) or to seek their help to solve the problems does amount to Shirk or Bidat. Remember that Saints are alive and alert and have innumerable powers bestowed to them to them by the Grace of Allah even though laid to rest. Similarly, a little bit of more explanation will make people overcome the gross misunderstanding in their minds who are allergic in matter of Shirk and Bidat.

Let us start with the following question:-

(A) “Ghilaf of Kaaba is kissed by the visitors performing Tawaf.”
Tears are visible in their eyes when they touch the Ghilaf, their lips utter prayers, their hearts throbs with emotion, through each one known that the “Ghilaf” is made of material prepared by human hands and it costs thousand of Riyals. The cost of the material has absolutely no worth before them but real philosophy behind all these kissing’s is the Holy place covered with Ghilaf, through Kaaba itself is built of stone and materials.

(B) “Hajra e Aswad” a stone of Kaaba Sharif and is kissed by the visitors performing Tawaf.” Here is saying of Hazrat Umar (R.A.U..) is worth quotation. Addressing the “Hajra e Aswad”, He said “O! Hajra e Aswad”, I know thy worth is no more than a piece of stone but since the Holy Prophet (S.A.W.) kissed thee it becomes binding on me to follow in his foot “steps”. It has to be kissed either by lips or by show of hands in case o rush.

(C) “HOLY QURAN” is printed on a piece of paper and has it outer thick cover which looks like a book but is kissed by the deepest reverence and emotion for very fact that right inside the revelation from Allah. People don’t kiss Novels and story books, through they are made of same material.

(D&E) Hands, feet, faces are apparently noting but bones covered by flesh, skin and hairs, but to a kisser it has a different meaning he respect and loves those part of the body of beloved persons.

(F) Apparently, Trophies are made of metals and materials and have some monetary value, but to winner of the reward it becomes priceless article. The feeling of honor, respect and enthusiasm when combined together in the mind of the recipient make him kiss the trophy.

Likewise, kissing of feet or hand, Chaddar of Holy Saints the friends of Allah, to whom all the reverence is due, does not tantamount to Shirk or Bidat from any arguable angle Regarding request, appeal, Wishes, or desires to be granted by Saints also cannot be rightly termed as “Shirk or Bidat” for the very reason that people do request their friends relatives, parents, their bosses, government official and higher up pleading for help. Do the convinced persons not file Mercy Petition to the Head of the State to save their lives? Though the life and death is in hands of Allah? Do not the children, even the grown ups request or demand that religion so rigid that at every step they issue fatwas, especially ruling about “Shirk or Bidat”. May Allah guide and make them realistic and sensible in their approach particularly in the manner of faith.

Allah is the prime source, the acts of Aulia-the enlightened Saints, are nothing the attribute of Allah channeled through them.

Some erroneous type of concept of many people has been developed towards the acknowledgment of Aulia (Saints) in the religion of Islam. Some of them do not know about the reality of this magnificence Aulia Akram (Holy Saints) and some of them say that, These Sufis and Saints are baseless since there is not any type of Zikr in Quran and Hadith. For both the type of communities, ALLAH ALL MIGHTY and HIS PROPHET MUHAMMED (S.A.W.) has delineate by giving orders in the Holy Quran and Sunnah.

In the Holy Quran;
“LA ILLAHA ILLAL LA HO WAHDAHO LASHARIQA LAHO”, ALLAH revealed:
Behold! Verily on the friends Of Allah there is no fear, nor shall they grieve;

those who believe and (Constantly) guard against evil. For them is Glad Tiding, in the life of the Present, And in the Hereafter: No change can there be in the Words of Allah .
This is indeed. The supreme Felicity. [10:62]

In another words Allah have revealed in the Holy Quran:-
None one can be its guardian except Al-Muttagun (The pious, Saints)
But most of them know not [ 8:34 ]

Allah declares that:
“Verily, he who has purified the Nafs has attained victory,
and he who has despoiled it has lost.

Allah also states that:
“That day of Qiyamat (the day of doom) neither wealth nor sons will benefit anyone, but that person who comes to Allah with a reformed hearts”.

Through these Surrahs reference of Holy Quran it is undoubtedly defined that Aulia Allah (Saints) are not erroneous but also ALL MIGHTY ALLAH keeps them His comrade. Also Prophet Mohammed (S.A.W.) has briefly clarified this issue of Aulia Akram (Saints) in Hadith.

Hazrat Saad Bin Abe Waqas (R.A) has narrated that, Once Prophet Mohammed (S.A.W.) said that “Allah alleviates the nations but through His devotees friends”.

In this Hadith which is narrated by Hazrat Saad Bin Abe Waqas (R.A.), Prophet Mohammed (S.A.W.) has defined that Allah helps the nation as a sum or individually only because of His friends which are Aulia Akram (Saints).

Hazrat Eabad (R.A.) has narrated that once Prophet Mohammed (S.A.W.) said that” In MY nation there are forty Abdals (devotees) because of whom the system of the world exists. Cause of them rainfalls and due to them you are helped.

Hazrat Annas (R.A.) narrates that once Prophet Mohammed (S.A.W.) said that “This world will not remain vacant from forty Abdals (devotees). Those who will be from the grandsons and nation of Hazrat Abraham (A.S.) and due to them you will be helped.

All the authentic principals of Aulia Akram (Saints) are to be found in the Holy Quran and Hadith. This clearly untrue the saying, that Aulia Allah (Saints) are baseless or flawed and since there is not any Zikr of these Sufis and Saints in Holy Quran and Hadith is absolutely erroneous and against the teaching of Quran & Hadith. Even though, Allah and His propitiate Prophet Mohammed ((S.A.W.)) have explicitly defined about these enormous celebrities. As we can see that these Aulia Akram are the major part of Islam and also they are one the most lightened path for the true believers and followers.

The spiritual statue of this Saints Undoubtedly is below the prophets, yet they are recognized as true successor of them. Their spiritual heights and achievements are enormous, glittering and unforgotten as they have attracted the suffering masses to their fold through their supernatural acts and mystic deeds. The suffering humanity not in their life time but even after passing of hundred of years after their breathing the last continues to be blessed even to this day and look up to them relievers of their worldly needs spiritual problems such as incurable, misfortunes, untold, miseries and natural calamities.