For about 250 years, the Ajmer Sharif Dargah remained unconstructed premises. In 1464 A.D., the sultan of Mandu, Ghyasuddin constructed a Mazar and the dome over the existing structure.The Dargah of Khwaja Saheb is a huge complex with many buildings built by emperors, kings and other such persons which stand as a living witness to how worldly power bowed at the feet of a faqir. A sort of divine sacredness has a permanent residence here, with a spiritual fragrance wafting through the air, adding a quiet esoteric grandeur to its ambience. A brief description of the various buildings follows :- 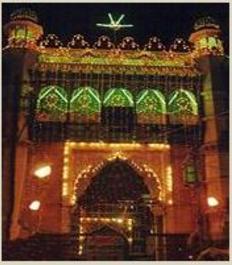 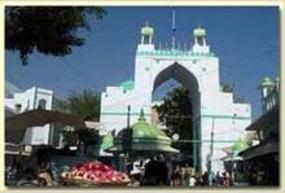 Built by Emperor Shahjahan in 1638 A. D. It also has a Naqqarkhana on it. 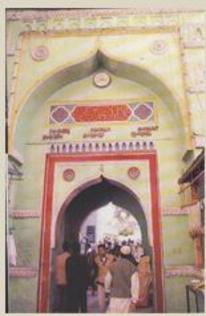 According to the Ain-e-Akbari, emperor Akbar had to visit Ajmer for military purposes during 1561 to 1568 A.D. but in the year 1570, Akbar knowing the spiritual powers of Khwaja saheb, came to the Dargah and requested Khwaja saheb to fulfil his desire for a son. And as his desire was fulfilled, he got a son named Salim. Akbar came to Ajmer Dargah on foot from Agra to pay homage and to thank Khwaja saheb. The trek from Agra to Ajmer took him 15 days. Akbar had a beautiful mosque constructed in the same year. This mosque is today known as Akbari Mosque. Akbar built this mosque of red stones in 1570 A. D. Its central arch is 56 ft. high. 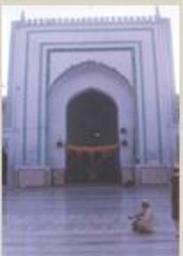 The mosque was built by Emperor Shahjahan in 1640 A. D. at the cost of about Rs. 240,000 in 14 years of continuous construction work. It represents all remarkable features of Shahjahan’s sense of architectural refinements

Built by Sultan Mahmud Khilji in 1452 A. D. and later renovated by Emperors Jahangir and Aurangzeb. It has marble tiling on the floor.

Built by Khan Bahadur Chaudhri Mohd. Bukhsh of Katihar in 1851 A. D. at the sacred place where Khwaja Saheb offered prayers for the first time.

Other sites in Ajmer Sharif Dargah

Built in 1646 A. D. on the eastern side of the shrine by princess Jahan Ara.

Within the premises of the shrine it is a gate on the western side which is opened on six days during the Urs and on first and sixth and tenth of the Islamic months of Shawwal and Zil Hijj respectively.

One of the more important places at the Dargah, which was built by Nawab Bashiruddaula of Hyderabad in 1899 A. D. Here Sama’s ceremony is held during the Urs.

Built in 1911 when Queen Victoria visited the Dargah.

The holy tomb of Bibi Hafiz Jamal, the daughter of Khwaja Saheb, was built by emperor Jahangir.

Situated behind Masjid Sandalkhana, on the western side, it is the place where the great Sufi saint Baba Farid Gunjshakar engaged himself in meditations. Its doors are opened on 5th of Moharrarn, only once in a year.

Constructed by late Syed Abdul Hameed, one of the Khadims, in 1954.

On the western side of the Darwaza lies the larger vessel, which was donated by Akbar in Hijri 976 (1569 A. D.) During Urs, about 100 mann of rice is cooked in this vessel, alongwith dry fruits and condiments. The preparation is called Tabarruk and it is distributed amongst the destitute.

Offered by the emperor Jahangir in 1615 A. D. the Deg, kept on the eastern side of the Buland Darwaza is enough to cook about 29 quintals of Tabarruk.

Here the langar (dalya of wheat and barley) is distributed daily in the morning and evening on behalf of the Dargah committee.